The train layout was built by five individuals in 2011 who were dedicated bringing the enjoyment of model railroading to the public through various venues such as National Train Day, Children's Wonderland, Community Railroad Festivals and train shows/swap meets.

While designing and building the layout there were two design criteria's that had to be met which are not generally not present with other modular/portable layouts.

The Primary Requirement was to build it at a 30 inch height that allows children and people that are in wheel chairs to easily view trains.

The second requirement was to make it fast and easy to set up and take down after a show. This has been accomplished in being able to set up in approximately two hours and take down including loading the trailer in two hours. Many of our design and construction ideas are now being copied by other modular/portable layouts. When not set up at a show the layout is stored in a trailer.

Details of the Layout.

Currently there are nine members of the Hobo Crew and all of us are active in model train clubs; Blissfield Model Railroad Club, Operation Road Show/Rails on Wheels Model Train Club, Montpelier Trackside Modelers and Raisin Valley Train Club.

The Next Show Date Has Been Set! 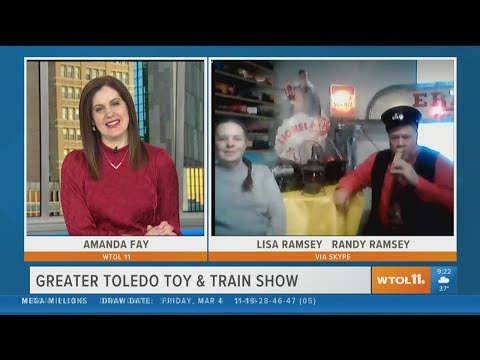 TOOT! TOOT! ALL ABOARD!

Show date for next year is set for Sunday March 8th, 2020

The Countdown Is On!

Tips for Waiting in Line on Show Day

Tips for Buying at a Swap Meet or Show